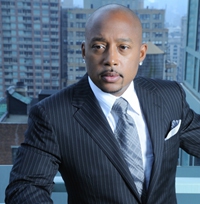 Changing fashion and the face of American business with FUBU was only the beginning.  What started initially with unbridled perseverance and a dream of catering to a market otherwise ignored, quickly transformed into a $350 million dollar per year business venture, global brand and enterprise.
Daymond John’s creative vision help revolutionize the sportswear industry in the 90s.  As founder, president and chief executive officer or FUBU – “For Us, By Us” – Daymond created distinctive and fashionable sportswear and a host of other related gear.  FUBU’s phenomenal success made mainstream apparel companies realize the potential for fashionable sportswear that appeals not just too trendsetting urban youth but to mainstream teens as well.  The “Godfather of Urban Fashion,” Daymond is also an author and is one of the most sought after branding experts and motivational speakers in the country.

In 2009, Daymond became co-star on ABC’s hit series Shark Tank, where aspiring entrepreneurs present their companies to a panel of successful business icons to raise capital.  Daymond invested in several of the companies on the show and has emerged as a spokesman for active angel investing.

With his deep insight and knowledge carried with unmatched charisma, Daymond is a choice expert on CNBC’s Big Idea with Donny Deutsch and MSNBC’s Your Business.  His TV credits include appearances on CNBC, CNN, CNNfn, BET News, ABC’s The View, CBS and PBS.  He has also been featured in many publications such as Black Enterprise Magazine, King and Hip Hop Weekly along with business website Forbes.com.  Daymond has a weekly mobile blog entitled “Display of Power: Point of the Week” for UrbanWorld Wireless.

In 2007, Daymond released his first book, Display of Power, the story of how he built FUBU into a global fashion power.  In 2010, his second book, The Brand Within, examines the loyalty-based relationships that brands and celebrities seek to establish with their customers and fans.